Exactly As I Say: Special Edition by The Hafler Trio

This release, with the voice of Jonsí Birgisson of Sigur Rós, was the first of a trilogy of works from their collaboration, which also yielded Exactly As I Do and Exactly As I Am, both of which were released on the U.S. imprint Important Records. Part of the ongoing, critically acclaimed series of The Hafler Trio recordings entirely constructed from voice, the previous releases included works derived from the vocal sounds of Blixa Bargeld and David Tibet.

The Special Edition of Exactly As I Say was limited to 111 copies and is now sold out. It includes:

The DVD that accompanies the Special Edition is entitled in transliteration Payodhi-jala. There are two untitled video streams, made based on and extended from techniques suggested by Prof. Hans Jenny. The soundtrack to both visual items is a piece entitled, in transliteration, Uttisthata.

Note to Purchasers of the Special Edition

If you experience technical difficulties in playback of the DVD, please do not hestitate to contact us. 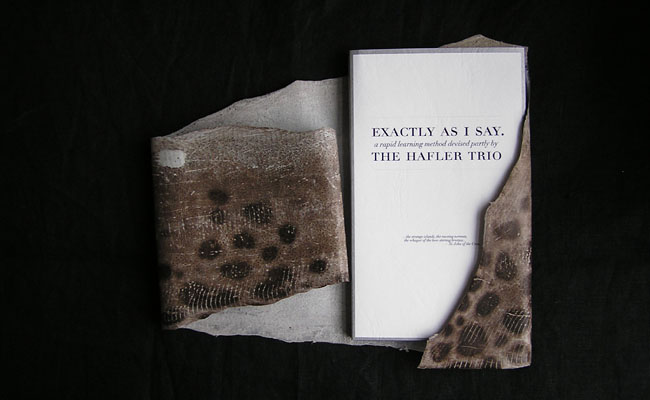 (c) Simply Superior. The contents of this site is watched over by several small men with pitchforks.